Constitution Park, including the pool, opened to the public on June 25, 1939. Of the total 100 acres on which the park was built, a total of 63 acres was donated to the City of Cumberland by Carl Richards and Carl F. Grabenstein in exchange for sewer and water service on a small plot near the park entrance.

The park pool was built by WPA (Works Progress Administration) labor, a program that was started by the Roosevelt administration to employ Americans during the Depression. Constitution Park obtained its name through a contest between school children, with the winning name submitted by a seventh grade student, Hume Annan. 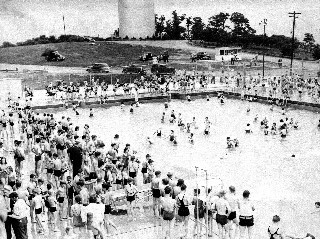 Grand Opening Celebration
Over 7,000 people attended the grand opening celebration, including over 1,500 “bathers.” Over half of the swimmers were under the age of 16. On that day, adults paid 25 cents, children between the ages of 8 and 16 paid 10 cents, and children under the age of 8 were admitted free of charge.

Rehabilitation Project
Since that opening day, Constitution Park has continued under the supervision and maintenance of the City of Cumberland’s Parks and Recreation Department. In 2000, attendance numbered 8,647 students and 2,683 adults. In 2001, the pool underwent a major rehabilitation, funded through Community Development Block Grant funds and a city bond issue. These improvements will ensure that the pool will be available for the same enjoyment for generations to come.
Notify Me®
Online Bill Pay
Submit a Request
Agendas & Minutes
Employment